What’s the best bicycle for a long-distance http://wellmuth.de/?  Impossible to say.  What I can tell you is which bicycles are the most popular for round the world cycle tours.

Here’s a short list of the most common touring bikes we’ve come across on our world cycle tour.   You’ll also find links to reviews of expedition touring bicycles and the low-down on who rides what in the world of long-distance bicycle touring.

If you meet a cycle tourist from the U.K., 90% of the time he or she will be riding a Thorn.  These bikes have got a solid track record and Brits swear by them.

Check Bike Radar’s excellent review of the Thorn Raven for complete information on the Thorn’s components and handling.

Below are reviews of Thorn Touring Bicycles written by experienced cycle tourists:

Other notable cyclists who ride Thorn Touring Bikes include Loretta Henderson of Skalatitude and Julian Bloomer of The Slow Way Home. 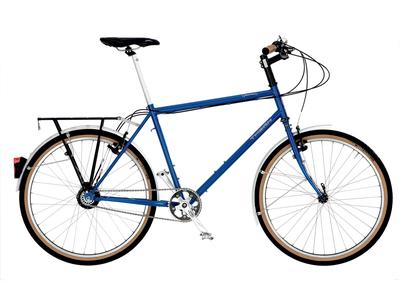 North American cyclists favor the Surly.  One reason is the attractive price tag.   For a little over $1,000, you can get outfitted with a basic Surly Long Haul Trucker.  A Koga or a Thorn could run you more than twice as much.

You can find several  honest reviews of the Long Haul Trucker on the REI website.

On Road Bike Review, the Surly Long Haul Trucker received an average rating of 4.56/5 in 32 reviews.

Notable cyclists who ride Surlys include Harriet and Neil of Pikes on Bikes, Tara and Tyler of Going Slowly, Chris Roach of the Cycling Strongman (who has been riding a Surly Troll for the past 45,000 kilometers as he circumnavigates the planet) and the three Berg Brothers from Bound South who rode most of the way from Alaska to Argentina on Surly Trolls. 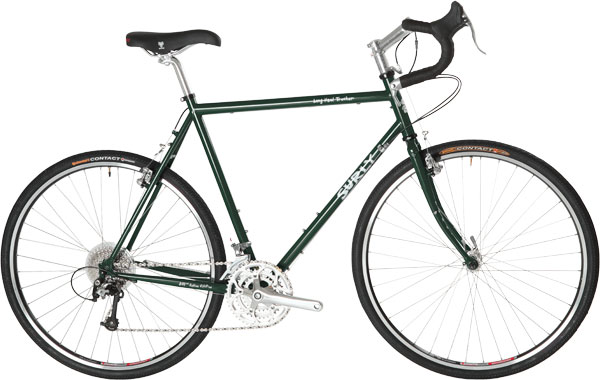 The Koga World Traveller tends to be favored by Northern Europeans and the Dutch (naturally) since these quality touring bikes are hand built in the Netherlands.

Bike Radar gave the new Signature World Traveller a stellar review with Cycling Plus magazine’s product editor Simon Withers awarding the Koga  a 9/10 rating for the frame, handling and equipment and an 8/10 for the wheels.

Nicolai Bangsgaard cycled more than 62,000 kilometers around the world on a Koga, Mark Beaumont rode a Koga on his world record breaking ride around the world and Grace Johnson and Paul Jeurissen of Bicycling Around the World are riding Kogas as they cycle the world in search of inspiring bicycle touring images.

My reliable Koga World Traveller has been with me for more than 110,000 kilometers on five continents. 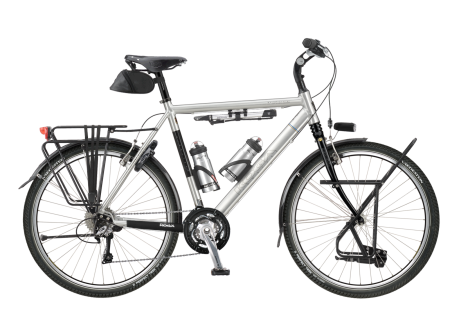 Santos touring bikes have been gaining popularity in recent years.  In a review of the Santos Travel Master, Bike Radar described it as, “an extremely capable tourer, with superb attention to detail and a wealth of build options.”

Steve Fabes of Cycling the Six is bucking the trend for British cyclists and riding a Santos Travelmaster2.6 Cromo Rohloff.

Fellow Brit Sarah Outen is also riding a Santos on her London2London via the World bike and boat adventure, Ollie Broom rode a Santos on his 14 month, 25,000 kilometer ride from London to Brisbane and Friedel and Andrew of Travelling Two are now riding on Santos Bikes. 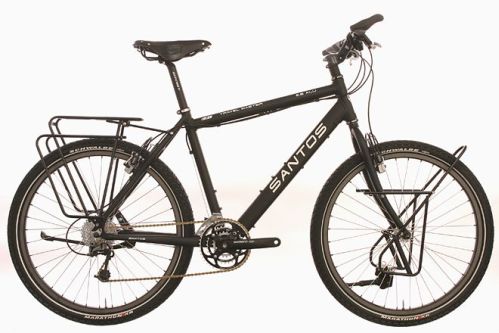 One man who’s taken them all out for a spin

Cass Gilbert of While out Riding has toured on a Santos Travel Master, a Thorn Sterling and most recently a Surly Troll.  He discusses the pros and cons of each touring bike here.

What's your touring bike?
Are you a Thorn, Kogo, Surly or Santos rider?  Please share your experiences and opinions.  Suggestions of other quality bicycles suitable for long distance touring are most welcome.

1 thought on “The most popular bicycles for long distance touring”