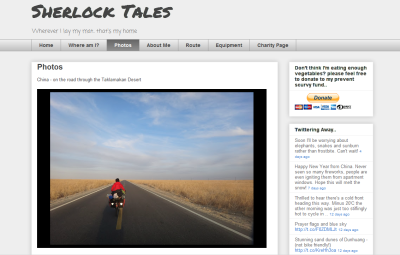 In April 2011, Jill Sherlock hopped on her fully-loaded touring bike and started heading east from her home in the UK.

…I stood alone and desolate on the S305 in the Taklamakan Desert, over 200 km from anywhere and over 3km above sea level. Two tears of frustration fell and froze. Clumsily I tried with numb fingers to undo the straps of my panniers to reach for biscuits to no avail. I reached for my water bottle wrapped in 2 pairs of merino wool socks and a trickle of water meandered its way through the ice and reached my lips.

The wind and isolation whipped my face and taunted me: it had been -24’C when I’d set off that morning and that was out of the wind. I can’t do this any longer, I can’t. I can. F*ck. I can’t.  For weeks my feet had been frozen solid for 10 hours a day, each stretch of the desert was 3-5 days between towns, bed was under a mobile phone mast or in a low tunnel under the road, or behind a sand dune. Get a grip, damn it. I could no longer see the beauty of the desert. It was now just colourless wasteland.

My body shook uncontrollably. I’d ascended too quickly and the altitude had taken hold, I just wasn’t acclimatising and the cold had kidnapped my core.

Wait, what’s that? I could hear a vehicle and leapt out of my despair. Over the crest of the hill a police van appeared. I stepped into the road and waved it down. Down. Wave. Please stop.Stop. Please.

With my hand still aloft I watched it pass me and watched it still until it disappeared over the curve of the earth. The silence and the solitude returned. Nothing. Nothingness. Not a thing. Not. Can Not. I was startled by a inhuman roaring cry that echoed the fear, frustration and failure I felt. I looked helplessly around me and then realised it had come from me.

I sat down in the dust and continued a lengthy battle with my thoughts. Finally a smile crept to my lips: I’m a celebrity, get me out of here! But I’m not and I can’t. I stood up, picked up my bike, rearranged my frozen balaclava and continued pedalling east.

I’ll bet you’re as hooked on the tale as I am.

Jill has an obvious gift for story-telling and if you delve into this blog, you’ll surely end captivated by her encounters with strangers and battles against the elements.

A browse around Sherlock Tales is a wonderful way to get lost in another world for a few hours.

The Blog
Visit the site, marvel at Jill’s ingenuity and good humor and cheer her on as she continues riding east.