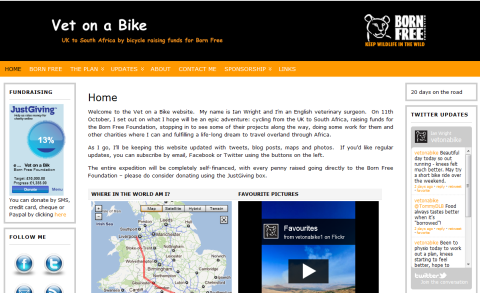 We’ve stumbled upon a Familiy on Bikes, a Teacher on Two Wheels and now a Vet on a Bike.

Vet as in veterinarian, not someone who’s spent time in a war zone.

On 11th October, 2011 Ian Wright, an English veterinary surgeon, set out on what is sure to be an epic adventure: cycling from the UK to South Africa.

Along the way he’ll be raising funds for the Born Free Foundation, lending a hand to their projects and fulfilling a life-long dream to travel overland through Africa.

Ian originally planned to buy a Land Rover for the trip, but one day he ran across the blog of someone doing the trip by bicycle and an idea was planted.

He realized that, while there weren’t exactly streams of people doing Africa by bicycle, there was at least a dribble of people attempting it.

Intrigued by the idea of the challenge, the immediacy of being outdoors rather than stuck in a vehicle, and the fact that few people have ever done anything like this, the idea took hold and the planning phase was set in motion.

Our Vet on a Bike will be following a classic Cairo to Cape Town Route, arriving in Africa via ferry from Greece.

Ian has done a particularly fine job of documenting his gear.  You can get the low-down on his:

The Vet on a Bike Africa tour has met up with a few early complications:

Carrying on with the knee in this state was obviously no good.  I could either rest for longer where I was, or turn around before I got too far from home.  As much as I hate to do it, I’ve decided to go home for a spell.  This way, I can get medical advice from a health system I’m used to, and have a fixed base that won’t cost me too much for as long as it takes to get things sorted.  Once I’ve got an idea how long this will take, I’ll make a new plan.

So, I got the next ferry back to Dover, then a train back to the Wirral.  Just as well I came home when I did – my parents are away on holiday and the neighbours who have the spare key were just about to go away as well!

Turning around so soon into the trip feels absolutely devastating.  I’m not giving up – I’m trying to see this more as a tactical withdrawal rather than a full defeat, but am obviously feeling pretty low at the moment.

Stay tuned.  That’s what I plan on doing.  I’m hoping Ian will get his knee issues sorted out soon and be back on the road to Cairo.

[stextbox id=”grey” caption=”Follow Along”]Check out the Vet on a Bike blog and show Ian your support for his charity ride through Africa.[/stextbox]