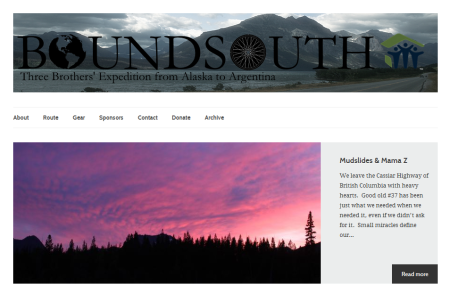 20,000 miles in 10 months plus $60,000 raised to sponsor the building of a family home through Habitat for Humanity.  That’s the goal a trio of North Dakota brothers –David, Nathan and Isaiah Berg–have set for themselves.

And I must admit I’m one of them.

Cycling all the way from Alaska to Argentina in ten month’s time merits a place in my book of the next to impossible.

That said, youth is on their side.  The two older brothers have just recently graduated from college and the youngest is only just out of high school.  If anybody can crank out 2,000 miles a month, it’s them.

Here’s a tidbit of bike touring advice from Bound South that caught my attention:

Avoid riding a bicycle through a dark night in the mountains, but if you must, enjoy the ride. Despite our best, efforts we sometimes underestimate the terrain and overestimate our abilities.  The result is a dreaded late arrival.

When one has been pedaling since 9AM, you don’t want to be pedaling after 9PM.  Once darkness falls the headlamps come on and the world compresses to the patches of mountain road illuminated by your lights.  At first it is terrifying; one might pass by a bull moose or grizzly bear on the side of the road without either realizing it.

We yelled out a few songs to warn the wildlife and to lift our spirits.  We hurtled through the darkness of the Cassiar as the drizzle turned to snow.

If the guys mange to pull this ride off–reaching Ushuaia in May 2012 after just 10 months on the road– they’ll have earned their place in the Bicycle Touring Hall of Fame.

But in the end it doesn’t really matter.  The brothers will have undertaken a bold adventure, tested their limits and raised money for a worthy cause along the way…and that’s what really counts.

Follow along as Bound South bikes the Americas and show your support and  solidarity on their Facebook page.