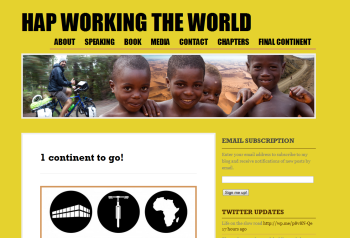 After earning a business and communications degree, New Zealander Hap Cameron could have settled into a comfy corporate job.  Instead, he began a quest to live and work on every continent before the age of 30.

That was back in 2003.  Now the intrepid Kiwi has toiled away on six of the seven continents, and he’s setting his sights on Africa.

For the final chapter of his global adventures, Hap is focusing on giving something back: bicycles to be exact.

In this final leg of his round the world work odyssey, he’s teamed up with charities Bicycles for Humanity and the Bicycling Empowerment Network, Namibia, marrying volunteer work and cycling.

After Hap’s got the project up and running, he’ll hit the saddle with his partner in adventure, Mandy  Todd, to cycle 5000 kilometers through Southern Africa.

Hap’s keeping his bicycle touring plans flexible, just as he has throughout his nine years of travel.

Like my travel motto that I learnt from a drunken Irish backpacker in Brazil back in 2005 is “a plan is just a list of things that can go wrong”. Yes I will be prepared and organised, but since I have been working the world, the main ingredient I have found for enjoyable travel is to be flexible. I don’t want to miss out on an invitation to attend a local village’s snake dancing festival where I will drink snakes blood and party for 3 days straight because I have to be in a certain place on a certain date. I prefer to have a start and a destination and a rough plan to get me there.

Hap’s currently organizing bike workshops in Namibia, but soon he’ll be setting off for some serious riding around Africa.  After all, time is running out, Hap turns 30 on the 11th day of the 11 month of 2011.

Check out the blog!
Follow Hap on the final leg of his adventures: cycling and working in Africa