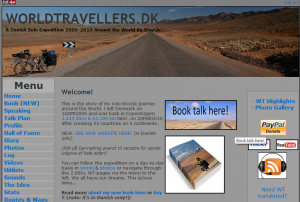 Each year we hear of numerous adventurous souls setting off to “cycle around the world”.

But how many rides really live up to that lofty notion of pedaling a bicycle across the planet?

I followed Nicolai on his pedal-powered journey right from the start, way back in the spring of 2006 when he set off from his home in Denmark.

What amazes me most about Nicolai’s bicycle touring blog, is the indefatigable good spirits that shine through in his posts.

Sure, this guy suffers just as all cyclists do, but he’s never one to whine or dramatize situations.  What’s more, Nicolai is blessed with the rare gift of being able to describe the world in a way that makes you feel as if you’re along for the ride.

Here’s the nugget I came up with when I clicked on a random diary entry:

The headwind is mild but consistent all day. It makes for some pretty tough 145 km today. Around 100 km of today’s ride go through beautiful, lush pine tree forests, along dead-straight roads for 5-10 km at a time. I just keep turning those pedals. Round and round they go. At the end of the day I think to myself that I’ve had enough of pine trees for the day. I run out of water before I reach Hampton Springs, due to a complete (and surprising) lack of facilities the last 42 km. Tongue out of mouth like a dog, dry as sand paper, mind focused on that cola.

At the counter at a gas station in Hampton Springs I buy a liter of Coke and randomly ask the woman how much a night at the campsite in the back is. I’ve been in guerilla camp mode ever since I arrived here in the US, and didn’t plan on staying in a camp site tonight, but when the women says “It’s 5 dollars, darling”, we have a deal. The brand new bathrooms (80.000 USD I was told) at the Rocky Campground come highly recommended!

853 km since I left New Orleans 6 days ago. My ass’s hurting from all that cycling and it looks like a rest day tomorrow.

I’ve been craving for mustard and pickles lately. Weird isn’t it? It makes me wonder: Am I pregnant?

I finish off the day sitting on the grass next to my bike and my pitched tent, with a large can of cold beer in my hand, birds in the trees go crazy in the early nightfall, it’s a precious moment, for the birds and for me too…

This is a cyclist who “rarely leaves home (i.e his tent or hotel room) without his camera(s), diary, and pen and “thinks of himself as an observer rather than a participant.”

What this boils down to for you, as a blog reader, is striking photos, stunning videos and witty and insightful prose.

There’s so much to delve into on World Travellers, you may not know where to start.  May I suggest:

A selection of favorite photos from Nicolai’s RTW tour.

The World Traveller’s Log where you’ll find country overviews and information about routes and distances.

One of the many beautiful World Travellers Videos:

Check out the Blog
Want to experience a round the world bicycle tour without leaving the comfort of your couch?  World Travellers is the site for you.