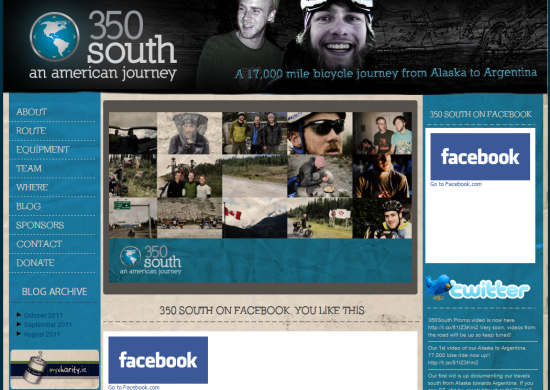 18 months is the typical amount of time it takes to bike the length of the Americas.

Cyclists generally set off from Prudhoe Bay, Alaska at the start of the North American summer  and arrive in Ushuaia, Argentina – the southernmost city in the world- a year and a half later during the South American summer.

Less than a year to bike 27,300 kilometers (17,000 miles) down the entire length of the Pan-American Highway, the longest motorable road in the world.

Along the way they’ll experience the vast Alaskan wilderness, the rugged Pacific coast, humid Costa Rican rainforests, the remote Bolivian Salt Flats and finally the windswept Patagonian pampas – all from the saddle of a bike.

Ian says he’s, “decided to stay as far away from computers and desks for as long as possible and go see some of the world.”

The team has decided to travel by bike because it will allow them to use all their senses to discover faraway places and they’ll be able to stop and chat with people they otherwise wouldn’t meet.

July 15th 2011 marked the beginning of the 350 South cycling adventure.

Check out the site, follow their blog and be sure to slip the guys an email and cheer them on as they pedal through 15 countries, scale 3 mountain ranges and battle blistering desert heat and freezing winter cold on their way to Tierra del Fuego.