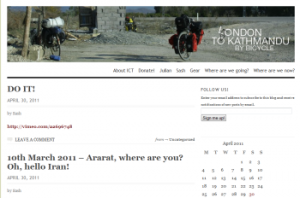 Once an idea gets in your head and starts to grow, it can be a very difficult thing to purge.  That’s what happened to Brits Sash and Julian, who now find themselves midway through a bicycle adventure from London to Kathmandu.

They’ve adopted a temporary ‘life is the bike’ mentality, believing that the success of a long-distance bicycle tour ultimately boils down to the state of mind you are in.

Their bicycle touring blog is chock-full of inspiring photos and insightful tales from the saddle.

Here are a few of their thoughts on bicycle touring in Iran:

So our first night in Iran, in a beautiful spot, with great weather, new cars, road signs, money, food and customs. This is what I’ve been waiting for – the trip has really begun.

We pack up and leave, taking time to savour every new experience on the road towards Tabriz. We stop in the first town of Maku and play on the outdoor fitness machines, occasionally stopping to duck away from the sound of what seems to be gunfire in the near distance. Turns out its kids playing with bangers – a popular thing to do during the run up to Iranian new year which is set to be in about a week.

We pick up supplies for lunch in the first shop we see in town and have our first experience of dealing with Iranian money – a confusing affair as a result of hard inflation over the last few years, meaning that the name and numbers of the currency printed on the notes is almost entirely obsolete. Everyone talks in Tomans, which is equivalent to ten times the price printed on the notes in Rials. 10,000 rials equals about one dollar (or 100 tomans) meaning we have fat wads of cash in our hands. We over spend in the shop treating it like monopoly money, and spend about 10 minutes thinking we’ve been ripped off ‘no, tomans not rials!’ its going to take a while to get our heads round it.

The mountain scenery distracts us for the next 50km, as does the forward friendliness of the Iranian people. After 10km a car pulls up ahead and a girl gets out, waves us down and hands us her phone, which has an English speaking person on the other end. He asks us where we are going and says if we need somewhere to stay when we arrive in Tabriz we should let him know. We shake hands with the girl (not what we were expecting to do!) and they drive off, leaving us a bit bewildered. Signs of things to come for sure.

If you’re looking for detailed bicycle touring route information across Europe and Asia, check out Sash and Julian’s Where are we  Going section.

They’ve done some serious research and have outlined all the potential pitfalls and pleasures associated with various routes.

[stextbox id=”grey” caption=”Follow Along”]This is a fun, easy to follow blog that will get you itching to explore Asia by bicycle.  Check out London to Kathmandu and cheer the guys on as they tackle the tough roads in Central Asia.[/stextbox]