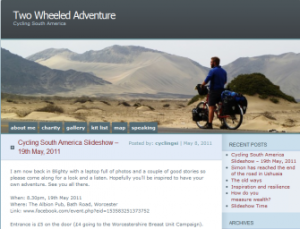 In Sept 2010, Simon Whitehead left the UK to cycle solo and unsupported through South America from Ecuador to Ushuaia.

After 11,000 kilometers, six months and too many punctures to count, he finally rolled into the world’s  southernmost city.

Simon says he’d do it all again, without pause or hesitation.  If you spend enough time perusing his blog, he might just convince you to do it, too.

This South American cycling adventure may have come to a close, but the blog is sure to inspire for a long time into the future.

Simon’s writing is often poetical, peppered with keen observations and reflections.  Here are some of his thoughts on cycling Patagonia:

I am in Patagonia, it is all my dreams. A land of stories told around wood burners, where fighting the weather just wastes time, cb radios, gouchos and ancient forests. I am sharing it with Adrienne (who is patiently rumbling along at a cyclists pace (eight hours for me… one hour for her!) so we can travel together and enjoy this sensational land. Glaciers tumble down into azure rivers that wind through moss-laden forests which are home to deer and puma. We are not alone, there are cyclists, hitch-hikers, motorcyclists and 4×4 motorhomes rumbling through the gravel with jaws dropped and cameras flashing.

We are following The Carratera Austral, a stroke of genius by the former Dictator Pinocet. He may have been up to no good (understatement) for most of the time but what a vision. To connect isolated villages and estancias with a gravel road that feels as though it has had to claw itself through the wilderness. It has opened a wondrous world, despite creating a scar 1200km long, and has been some of the best cycling of my trip. It has been an adventure from the start.

His writings on Why we Adventure eloquently sum up how many of us feel about travelling on two wheels:

Is it the great stories of adventure and daring that inspire? Is it someone who has suffered, lost and then rebuilt, demonstrating stoicism, commitment to the future and resilience to all that is thrown at them? … By nature or humankind.

For me there are many things that have inspired me to be where I am (on the coast of Chile). When I try to think back to what made me want to embark on my adventure it came from the most unlikely of sources.

My passion for climbing and mountaineering had been born from books about great adventures in the greater ranges, the suffering, the challenges and the camaraderie that develops through a shared experience of danger and the unknown.

For cycling it was not the fastest, strongest and most daring tale of adventures that first planted a seed in my mind… it was a retired headmistress who on finishing her working life decided to head off round the world. She was not an adventurer, although she was well travelled, but rather she saw the benefits of seeing the world through the perspective of a cyclist. The ability to feel every contour of a map, the surface of the road and move slowly enough through a culture that slowly it seeps into your pores.

A look through the GALLERY page, with its photos and videos, will give you a good idea what cycling South America is all about.

[stextbox id=”grey” caption=”Check out the site”]This is a great bicycle touring blog to get you dreaming about the wondrous wide open spaces of South America and the incredible freedom of travelling by bicycle.  Spending some time with Simon on his Two Wheeled Adventure site is sure to get you one step closer to setting off on your own cycling adventure.[/stextbox]