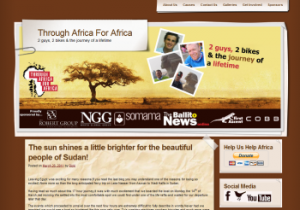 South Africans Davey du Plessis and Ricki Nethercote are cycling the length of the African continent, from Egypt to South Africa.  The two-wheeled adventurers’ main aim is to dispel the ‘Dark Continent’ tag attached to Africa.

Through their bicycle journey they hope to show the reality of the situation in Africa with regards to its people, the wildlife and the environment.

An additional aim of this Africa bicycle tour is to prove that it is possible to travel and endure a degree of grueling activity while maintaining a vegan diet and staying healthy.

Through Africa for Africa is still in its infancy, with the guys just having made it through the turmoil and upheaval in Egypt, across Lake Nasser and into the Nubian Desert.

Here’s what the bicycle adventurers had to say about cycling Sudan:

Camping in the desert was both calming and unforgettable. What an experience to stand in a desert illuminated by the full moon, not a sound to be heard other than the crackling of fire wood. To stand there and soak up the grandeur of it all was even more reason to feel blessed. The grandeur of the spider, illuminated by my headlamp which had me leaping over my tent in order to escape it’s deathly clutches.

The desert seems to bring out the best in those around you! Every once in a while we would stumble upon a small group of people living out in the desert. They would have 3 big pots of drinking water and when seeing the crazy boys on bicycles stop, they were only too happy to fill our bottles for us. We were treated to several cups of tea, given prime position out of the sun in villages, given oranges and tomatoes in an area where food is scarce and made to feel truly welcome to set up camp wherever we pleased. It cannot be an easy life in the desert, but one would think we were cycling through the land of milk and honey judging by the way we were welcomed. And this was all while being caked in a constant layer of dirt which would gradually thicken as the days without a shower would begin to add up.

Ricki and Davey are committed to making a positive difference as they cycle through Africa.  Follow along and see what they discover as they cycle one of the most misunderstood continents on the planet.

4 thoughts on “Through Africa for Africa”