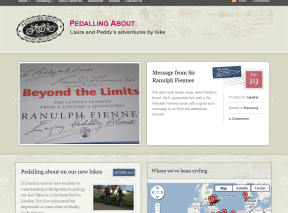 Laura Pollitt and Paddy Mottram are keen cyclists in the final planning stages of a circular cycle tour of South America. On their blog, Pedalling About, the couple shares stories from the trials and triumphs of tour planning  and training rides. But not for long, in May they’ll board a plane bound for Rio and then there will be real South American bicycle touring adventures to write about.

Paddy and Laura’s ambitious route  plan is to cycle through all 13 South American countries and visit each capital city.  They’ve got some long days in the saddle ahead of them, since their aim is to do this in just one year’s time.

They’ll meet up with plenty of challenges as they take on the Atacama Desert, the Andes and the Amazon.

A fear of turning 30 is the main impetus behind the tour. And, as with so many of us, they desire to see more of the world, have an adventure, and push themselves to escape life’s daily routines.

They’re energetic riders and their South America bicycle touring blog promises to be lots of fun.  Here’s an excerpt from a recent post about a training ride following  the UK Coast to Coast route:

We’d been warned about the climb coming out of Garrigill, but naively thought with Hartside the worst was behind us. Fools! The road just went up and up and didn’t stop. We crawled up the thing with long spells of pushing where it just got too steep. It took us an hour to get up to the top and five minutes to fly down the other side into Nenthead where we had a picnic lunch, shivering in the cold.

The climb up Black Hill Summit, the highest point on C2C at 609m, warmed us up again, although we were greeted at the top by a flurry of hailstones that stung our faces. We didn’t stick around long therefore to admire the view, but did chat briefly to two guys who were doing the whole route in a day. They’d started at 5am in Workington and were hoping to finish by 7pm. The thought that somebody could do the entire thing in a day made us thing the boys might make it, so we pushed on too.

After a quick stop in Allenheads we saw the first blue sky of the day as we climbed the short, sharp hill coming out of the village. This made us very happy, and we were in great spirits as we whizzed down the four mile descent past Grove Rake Mine. However, we were quickly brought back down to earth turning the corner into Rockhope and hitting a headwind and blinding hailstorm that nearly saw Laura take Paddy out when he stopped to layer up.

The last mile was cold and wet and we’d made the decision to sleep in the bunkhouse rather than camp even before Val at the Barrington Bunkhouse showed us the room complete with roaring fire and comfy beds, all to ourselves.

Cleaned up and warm we headed to the next door pub to wait for the boys. We decided not to worry until 8pm, but as it got darker, colder and wetter and we still couldn’t get in touch we grew concerned. We finally heard from them that they had stopped in Nenthead, 20 miles back. For once they’d made the sensible move and we could relax knowing they weren’t lost in the middle of nowhere.