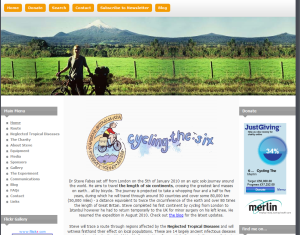 In early 2009, Steve Fabes embarked on a five year solo bicycle ride around the world.

This former London physician plans to cycle the length of each populated continent, racking up around 50,000 miles –the equivalent of twice around the world.

He’ll take on the Alps, the Andes and the Himalayas.  He´ll tackle the Sahara and the Sinai.  And along the way he’ll find the time to jot down his thoughts, snap a few photos and share some of the world’s remotest spots with all those back home.

Steve’s  knack for storytelling and fine humor make the Cycling the 6 Bicycle Touring Blog a great read.  Here’s how his recent post from Sudan got underway:

It is prohibited to cross the Egypt-Sudan border on land, and no paved roads connect the two countries, so a boat across Lake Nasser was our only option. We boarded the boat after stumbling through hours of beguiling bureaucratic chaos and paying an array of equally befuddling taxes. We settled on the top deck with a small band of foreigners. Each of us expectant, cheery and full of intrigue about the new lands waiting beyond the water. This felt like how you should enter a new African country. By night and by boat. Crossing a vast wild lake gave our entry a surreptitious and mysterious edge. We were past Aswan high dam where the densely populated Egyptian Nile ends and where crocodiles roam.

Steve has recently been joined by partner Nyomi, and the two will be cycling through Africa together.  Their next adventure will be a ride around remote Lake Turkana.  Few cyclists make it that far off the beaten track, so follow along on Cycling the Six and see what happens.