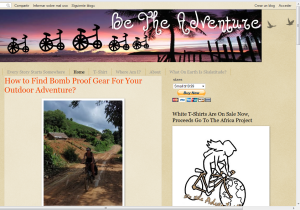 Ask the average world citizen what he or she thinks about a woman cycling solo around the world and what will they tell you?

She’s got to be crazy. That’s what they’ll say.

Canadian Loretta Henderson’s doing just that.  Pedaling around the globe.  Solo, on the road since 2008.

And while Loretta’s certainly not crazy to undertake a solo adventure, her writing is slightly wacky.  She finds the hilarity in the mundane and searches out the obscure.  Skalatitude, Loretta’s bicycle touring blog, is definitely not your run of the mill cycling site.

This blog title is fitting.  Throughout her bicycle tour, Loretta is constantly in search of magic.  And usually she finds it.  Even in the seemingly banal.

Mr. Potato Head Comes to Town:  How to find a Cycling Partner

When a big, fat bald man who looks like a Potato says “hey do you want to join up for a while and pedal through the Middle East and into Africa?” my first thought as a solo female traveler is well Mr. Potato Head always was a fun activity and great company on a rainy afternoon.

In the basement as a young little whipper snapper, I used to spend hours making up long traveler’s tales of epic journeys about Mr. Potato Head, the optometrist off to smell the world with his huge nose. Monsieur Potato Head, when he visited France, would always wear his mustache, formal top hat and scarf and say “oh la la” as the rain cascaded off the basement window cell throughout a long afternoon.

Mr Potato Head on a business trip at the international optometrist convention in Singapore would bring his suitcase, extra glasses and stethoscope and wear his travelers cap. Mr Potato Head, an impressive world traveler for such a stout round fella who always seems to wear such uncomfortable shoes.

A glorious soul full of nomadic voyeuristic ambition and great company for the solo female traveler. Therefore, Me and Mr. Potato Head, an easily entertained fellow cyclist and avid reader of this website will be joining up and heading through the Middle East and into Africa.

Other recent blog posts include:

At first, you may find some of the writing just a little bit too off the wall to sink your teeth into.  Keep going, once you get into Loretta’s world, you’ll find that it’s a magical place.

So far Loretta’s world bicycle tour has taken her through the UK, Ireland, New Zealand, Australia, Indonesia, Malaysia, Thailand Laos, Vietnam, China, Mongolia and Nepal.  Next up is a ride through Africa.   Follow Skalatitude and find out want happens to Loretta on the next phase of her solo round the world bicycle tour.