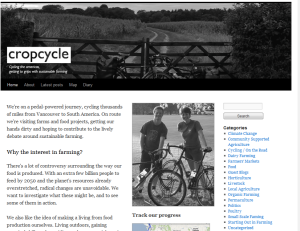 Charlotte and Ned are on a pedal-powered journey, cycling thousands of miles from Vancouver to South America. On route they’re visiting farms and food projects, getting their hands dirty and hoping to contribute to the lively debate around sustainable farming.

This is a great blog to follow, not just for pure entertainment value, but also to find out more about climate change, permaculture, organic farming and local agriculture.

This site is more than just getting to grips with sustainable farming.  Ned and Charlotte are on the adventure of a lifetime and they’re also out to simply have fun cycling.  You can read about all the good times (and a few minor setbacks) in the daily diary.

The more serious stuff comes in the regular blog posts.  Here are some of the couple’s observations while cycling California’s central valley:

Slightly inland from the coast our cycle route took us into the Salinas Valley – John Steinbeck stomping ground and fertile agricultural centre. Reaching the flatland between the Gabilan and Santa Lucia mountains it felt like we had burst into the realm of industrial agriculture. Spoiled by months of visiting small scale organic farms, idyllic markets and inspirational CSA schemes – this came as something of a shock.

For ten miles between Santa Cruz and Moss Landing we saw nothing but strawberry fields. Apart from the initial excitement of being able to pilfer some from the side of the road, we were totally shocked by the scale of the monocropping. Ten miles! Laden with fruit in November!

Having done a bit more research I now know that this area grows 80% of America’s lettuces and artichokes. I’m not sure about strawberries. Is anyone finding US strawberries in the shops back home now? (Not that you would dream of buying them, I’m sure.) If so, they are probably from round here.

Steinbeck wrote of how the Salinas Valley used to be an ocean inlet, and how on ‘the wide level acres of the valley the topsoil lay deep and fertile.’ He also wrote of the fragile nature of agriculture there – how in dry years ‘the cows would grow thin and sometimes starve to death…Some families would sell out for nearly nothing and move away.’ In the 40 minutes it took to cycle through the pungent mass of berries, I pondered whether things are much the same as when Steinbeck wrote about them in ‘East of Eden’. The exposed soil looked tired and vulnerable to the winds whistling down the valley, and the monocrop landscape had an otherworldly appearance – acres shrouded in white plastic sheets to protect from bugs or the heat, maybe. What would Steinbeck have to say about his beloved valley now?

The writing is consistently good and the posts thought provoking.  Crop Cycle is just getting underway, so this is a good time to get on-board and join Ned and Charlotte as they cycle the Americas.