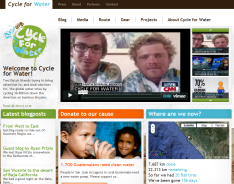 Joost Notenboom and  Michiel Roodenburg are on a mission to transport one bottle of icy Alaskan water from the Beaufort Sea 30,000 kilometers across the Americas down to the chilly seas surrounding Tierra del Fuego.

And their mode of transport?  Bamboo bicycles.

This must be a first in bicycle touring history.

This incredible adventure is taking the two Dutchmen through sixteen countries including the Alaskan and Canadian wilderness, the forests of the Pacific Northwest, the desert areas of Baja, the rainforests of Central and South America, the Andes highlands of Peru and Bolivia, and the steppes of Patagonia.

Why are Joost and Michiel taking 18 months out of regular life to devote their time to such a tough bicycle tour?  Passionate environmentalists, they want to raise awareness for the global water crisis that is leaving over 1 billion people around the world without access to safe and clean drinking water.

The duo is currently tackling Mexico and with over 22,000 km to go, you can be sure there are lots of adventures awaiting.

The guys update their blog frequently, so you can get a good idea of life on the road.  Here’s what they had to say about bicycle touring in Alaska:

Days also have a way of fading into each other a bit when you’re on a bike, no matter how stunning the scenery is that’s rolling past. And it is stunning!

We camped out in the bush one night, next to a big, muddy river, which allowed us to build our first true campfire and our spirits were high. We enjoyed the company of Heidrun, an avid hiker from the Lower 48, who showed us just how ‘luxurious’ we are traveling, carrying so much gear. This was shown to us again when we came across what at first looked like a hobo, but was in fact a French guy walking up to Deadhorse, with a little pushcart to carry all his stuff in… in the land of travelers there is always someone more hardcore than you are…

Unfortunately the rains came in, in a big way, the next day. But we nevertheless decided to set out, covering almost 90 kilometers until we reached the safety and warm showers of Cathedral Creeks. Even though fully booked, they took pity on two soaked Dutch guys and cleared out an old camper for us, after filling our bellies with ribs, beans, and brownies. Blessed!

Be sure not to miss their professionally filmed and very cool video.

Cycle for Water Promo from Michiel & Joost on Vimeo.

This is a fun site to follow and the cause couldn’t be better.  Check out Cycle for Water and join Joost & Michiel as they ride the Americas.