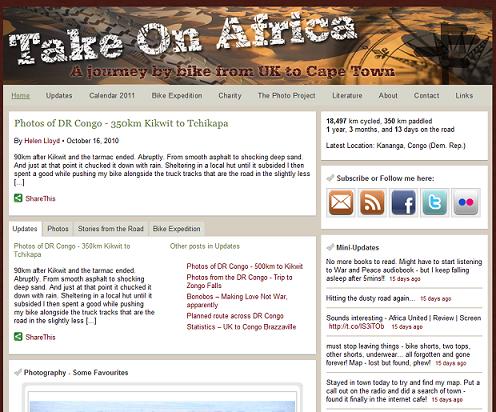 You don’t hear about many women cycling solo through Africa.  Helen has been on the road exploring the depths of the continent for more than a year.  She shares quirky stories, resources and fantastic photos on her blog.

Take on Africa’s strong on descriptive writing.  Here’s what Helen has to say about biking near Bamenda, Cameroon:

I cycle out of Bamenda, refreshed after the rest. The road sweeps around the green hillsides and I look out down the valleys into the distance. I am reminded of an English summer on a crisp, clear morning before the sun warms the air. But when I look closer I see palms and women selling bananas outside their corrugated-roof homes. And the grass never grows this tall in England. In England people use lawnmowers to cut the grass. Here people use machetes, if they cut the grass at all. This is Cameroon. It is beautiful.

There is a long hill up to the spread-out village of Sagba. I push my bike up slowly and eventually reach the top. I am in no rush and take regular breaks to admire the view. I also need regular breaks to rest and cool down and gulp down water and let my pulse slow down.

The blog is peppered with other amusing tidbits.   Just take a look at the statistics from the UK to Congo, Brazzaville:

If you’re planning a bicycle tour, you’ll want to have a look at the Equipment Review.

This is more than just the usual list of what kind of bike she’s riding and what’s stuffed in those panniers. Helen’s gone into detail about what spares to take and what to do to avoid some of the problems she’s encountered.

My favorite part of the site is the photos.  Helen’s 50 images of Africa are a must see.

Check out the Site:
Helen is one of the most adventurous cyclists currently on tour.  Check out her site, and maybe you, too, will get inspired to Take on Africa.