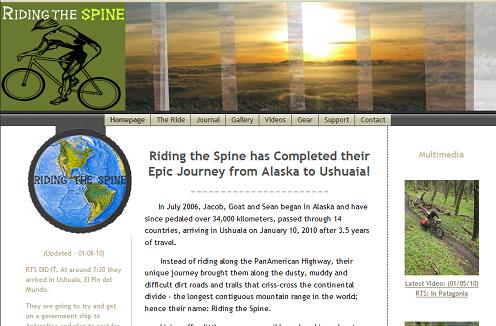 The term Bicycle Adventure is thrown around a lot these days.  Riding the Spine is one of the few tours that truly lives up to the label.

In fact, Riding the Spine has developed almost a cult following within the bicycle touring community.  Cycling from Alaska to Ushuaia, these guys shunned paved roads for deserted tracks, they cooked their own food, they slept rough in the wilderness, they ventured into uncharted territory and they wrote beautifully about their experiences. This site is a classic.

Americans Jacob, Goat and Sean make up the Riding the Spine team.  Jacob’s the blogger in the bunch and he knows how to capture the spirit of an adventure, with all its ups and downs.  Here’s what he has to say about taking on the infamous Patagonia winds:

The wind here in Pataogina- possibly a cyclist`s greatest nemesis, makes the daily ride, more of a daily grind. It is one of nature`s more violent features, pushing us from one side of the road to the other, sometimes into oncoming traffic. Other times, it feels like it actually grabs a hold of me and just shakes me while it screeches and howls in my ears. Under rain and sleet and heat, there always seems to be some solution. But wind is relentless, like a battlefield. To rest, or eat snacks we have to find some kind of windshield. Sometimes an abandoned building, other times we are crawling into culverts underneath the road, anything to escape the wind for a moment.

Sometimes invisible, other times so very tangible. Whether it takes form in a dust cloud, with stinging bits of rocks blowing against our faces and arms or renders the low brush and grass as fluid as abody of water, rippling with the gusts. Sometimes it feels like we are almost swimming in the wind, subjected to such powerful currents. When riding close together we simultaneously get blown into another lane, or when spread out further there can be a delay of a few moments, but inevitably the gust finds you. Somehow, we have rarely encountered much wind, until Argentina that is, and apparently, we are making up for lost time.

There are zillions of pictures on the site.  All are well-organized into photo galleries for easy browsing.

Riding the Spine also took time out of their 3.5 year tour to put together some very cool Bicycle Touring Videos.  You’ll be left wondering how they ever survived some of the roads and what diabolical urge lead them to such self-torture.

There’s a helpful gear information section, including a review of the Xtra-cycle.

This is the most inspiring South America bicycle touring site I’ve found.  The trip’s over, but the spirit of adventure lives on in the Riding the Spine blog.