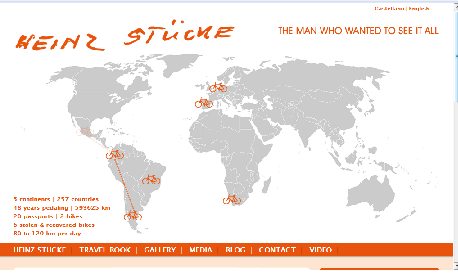 On the 4th of November 1962, Heinz Stucke  pedaled out of his hometown in Germany to begin  a bicycle journey that has yet to reach its end.

At an age where most people are comfortably enjoying retirement, Heinz is still hitting the road, camping wild and discovering some of the remotest parts of the planet.

In 48 years of non-stop touring, he’s chocked up 593,625 kilometers cycling through 257 countries.  And still the tour continues.   This is a cyclist who’s not ready to quit until he’s seen it all.

You’ll want to start by reading the story of Heinz’s incredible ride around the world.

Then check out the amazing photos of all the out of the way places Heinz has visited.

Next you’ll be ready for some impressions from the road.  Here’s what Heinz has to say about cycling in Japan:

I was able to regain strength during the night at the foot of shrines and even within them, because when the temple guard discovered me I was usually invited to sleep at his house where moreover he provided food and a bed. People often think that Japanese citizens are impenetrable and mysterious, but they have always shown me great kindness, always ready to laugh, with a childlike enthusiasm and willing to do anything that might be suggested: climbing a mountain, taking a tour, playing a game. They constantly gave me presents.  The only “problem” in Japan was communicating with people. They talked generally about minor things but don’t have the habit of expressing their feelings, emotions or talking about their problems. The traditional and indigenous culture was still deeply rooted.  The Japanese people were, and I think probably still are, the most homogeneous population of the world: once you understand one of them, you understand the majority.

Heinz’s incredible story is sure to inspire you.  Check out his new site.