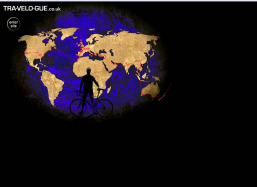 David Piper is cycling around the world.

So far he’s crossed 29 countries and biked 22,236 kilometers, pedaling an average of 181 kilometers per day.

Another super cyclist out to break the record for the fastest circumnavigation of the planet?  A corporate drop-out who’s quit his job, sold everything and hit the road?

Nope.  David holds down a full-time job.  But as soon as holidays roll around, he’s off on a bicycle touring micro-adventure.

If you’re one of those people who thinks a career and bicycle adventures in far-flung places can’t co-exist, check out Tra-velo-gue.co.uk.

Part travel guide, part route planner, there is a lot to browse through on this site

The best place to start is in the trips section which covers touring in Europe, the Middle East, Asia and North America.

Since David tours in spurts, his writing is always energetic and enthusiastic.  He shares history about the places he visits and describes in beautiful detail the landscapes that whiz by as he bikes at lightning speed.  Each trip report is peppered with a few telling anecdotes.  This tale from Turkey brought a smile:

That morning the hills kept on coming, and the road wasn’t without its hazards. Whilst I queued for the road to be cleared, the driver next to me slurped back his Coke and casually cast the can out of his window. In my shock at his attitude I shouted “hey” pointing at the can. He looked back at me totally bewildered at why anyone should give a toss about one more piece of detritus marring such a fabulously aesthetic land. If the Turks don’t change their attitude soon they will bury themselves in crap. Either that or I’ll start a company to collect the millions of pounds worth of aluminium that line the roads and make my fortune. So there!

Whether you’re an intrepid explorer or someone who prefers tamer adventures, you’ll find something on Tra-velo-gue.co.uk. to suit your taste.  David hits many of the ‘must-see’ sights, such as the Grand Canyon, Taj Mahal, Ankor Wat, and St Peter’s Square.  But he doesn’t shy from taking on physical challenge like the Monarch Pass in the Rockies, Death Valley, the Grand St Bernard Pass in the Alps, the Nullarbor Plain in Australia, or the Friendship Highway to Tibet.

David is a champion of ultra-light bicycle touring.  His entire kit weighs just 2.82 kilos.  That’s right, less than 3 kilos of gear.  Since I know you don’t believe me, check out the detailed gear list and see for yourself.

David has pulled off an amazing feat: cycling the world and maintaining a career.  Check out Tra-velo-gue.co.uk. and maybe you’ll get inspired to follow suit.