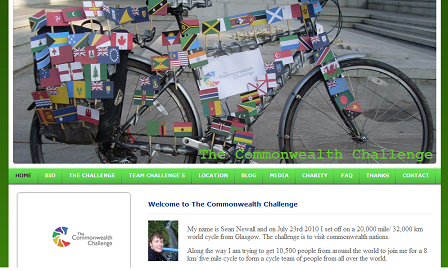 The Commonwealth Challenge  is another epic adventure you’ll want to get in on.    Sean Newall is on a quest to pedal 32,000 kilometers around world, visiting all 72 Commonwealth Nations along the way. Sean’s a great storyteller, which makes this a fun blog to follow.

This expedition is a major undertaking.  Here’s Sean’s plan:

4. World Sail – a sail powered navigation of the world.

An interesting twist to the project is the  Cycle 5 Challenge. Sean is trying to convince 10,500 people from around the world to join him for a five mile ride.  His target is to reach a combined total of 116,000 kilometers/ 72,000 miles.

“$100 Mr. Philip Sean” announced the head officer at the border. The stars on his shoulder distinguished his position of importance. He wrongly read my name from my passport that he had firmly in his possession. “You must pay us $100,” he repeated. I sheepishly corrected him about my name and looked around the large office helplessly trying not to make eye contact with the four other border guards that were deemed necessary to handle my case.

My eyes fell upon the large map of Kazakhstan that covered the wall to my left. Without thinking I scanned along the route from Uralsk to Taraz that I had finally completed. Compared to my relatively quick journeys through the other 8 countries that I had crossed, this had felt long. All I had wanted to do was leave Kazakhstan as well. Ever since being ill in the desert I wanted nothing more than to be out of this country. Each day it seemed it would give me a new problem. Be it riding in the desert or on terrible roads, worrying about crossing Russia again or about wolves at night and of course problems with food and being ill.

Sean’s currently in Bangladesh, headed for India.  Check out his site and follow along on his quest to pedal around the world and visit Commonwealth Nations.  And maybe you’ll even decide to join him on his cycle 5 challenge.