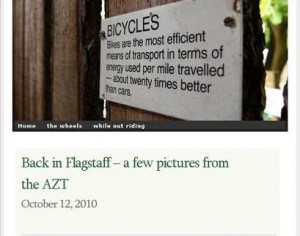 While Out Riding is a photo-story blog charting Cass Gilbert’s bike journey south from Prudoe Bay, Alaska to Central America.  His writing is highly appreciated within the bicycle touring community, witness the numerous emails I have received recommending While out Riding as one of the internet’s best bicycle touring blogs.

Cass’s fans are right.  His bicycle stories are full of humor and insight, and Cass’s eye for detail makes places come alive.

He has the gift of being able to put into words what many of us feel about bicycle touring:

Life becomes more straightforward, funneled through the simple act of spinning pedals, and the in/out rhythm of breath. A bicycle is minimal and uncomplicated, so it’s fitting that riding is a great de-clutterer. A brain and body sieve; keeping muscles and lungs working the way they should be, helping unmind the mind.

I enjoy biking for its natural connection with the outside world, be it on a ride through city streets, a cargo haul to the shops, or a journey across a continent. Going only as fast as your legs can propel you, carrying only as much as your engine will allow. Life’s possessions streamlined to the contents of a set of panniers. Simplified.

Cass has been touring regularly for the last 11 years. He’s cycled from Sydney to London, across Central Asia on a tandem, through Tunisia and Morocco, around SW China and Laos, and through the backroads of Cambodia.  His previous tours are covered on his old blog, OT Biking.

Cass has contributed many bicycle touring magazines including the very cool BoneShaker.

If great writing weren’t enough, the photos on While out Riding are nothing short of National Geographic quality.  It’s easy to see why Cass Gilbert has so many loyal fans.  I only wish I’d discovered this blog sooner.  Although Cass is off the bike for a while, settling into sedentary life in Flagstaff, Arizona, he continues to update his blog regularly.  Check out While out Riding and get prepared to be inspired.