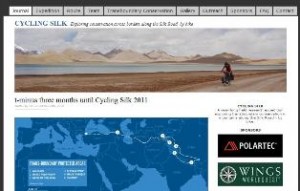 Inveterate adventurers Kate Harris and Melissa Yule are making good on their vow to finish cycling the Silk Road. Beginning in January 2011, they’re set to tackle the long and daunting stretch between Europe and China.  These enthusiastic explorers produce some of the best cycling stories on the web, so you’ll want to follow along as their latest bicycle touring expedition gets underway.

The best place to start on Cycling Silk is in the archives of the 2006 journey through China and Tibet. That’s where I found this gem:

The road to Tibet is paved in pain: in the butt, in the legs, in the brain that can’t conceive an intelligent thought because all it knows is the jolting of body and bike to which it is connected. As I bounced along this abominable excuse for a road on my jackhammer bike, I often had to remind myself that, like vagabond Everett Ruess:

I prefer the saddle to the streetcar, the star-sprinkled sky to a roof, and the obscure and difficult trail, leading into the unknown, to any paved highway…

Occasional pining for paved highways aside, this bumpy pilgrimage to the Land of Snows was the most sublime, surreal, and soaring experience of my life so far. And like all great adventures, it began at a crossroad. To the right was the unknown allure of Tibet, to the left the safe familiarity of Xinjiang. Standing there with our bikes, hesitating, never had a route looked so daunting for so many reasons: the lung-gasping altitude, the scarcity of reliable food and water sources, the atrocious condition of the road itself. The fact that Tibet was closed to independent travelers meant that our fate was entirely out of our hands. If we got caught, we were finished.

Next, I suggest you check out the travel tales from the duo’s 2005 ride across America:  Here’s an excerpt from a post that struck a chord with me:

As a cross-country cyclist, I constantly dance between two worlds. On a daily basis I share the road with air-conditioned gas-guzzling monster vehicles. I ride through towns with stores and newspapers and internet access and gourmet restaurants. But while I’m exposed to all these modern frills and ameneties, I’m just a vagabond who sleeps in a tent, doesn’t shower, and spends most of her waking hours pedaling a bike. It’s a weird, hybrid sort of existence, where I’m neither isolated nor immersed in society or the wilderness. Instead I’m a perpetual fencesitter with one leg touching on the cultivated field of civilization and the other leg dangling in wild, overgrown, wonderfully neglected weeds.

This is nomadism at its best, each day yielding some new acquaintance or adventure, insight or dream, vast horizon or gnarl in the road.

The Cycling Silk expedition isn’t just for the sake of sheer adventure.  Kate and Mel will also explore the impact of conservation across borders along the Silk Road.  The two cyclists are set to interview prominent scientists, politicians, policymakers, and conservationists they meet along the way who are engaged in some aspect of transboundary wilderness conservation.

Finally, if you’re in need of inspiration to get on your bike, check out one of Cycling Silk’s outstanding videos and photo gallery.

Cycling Silk is certain to be one of the great bike adventures of 2011.  Be sure to follow this all-women expedition through Asia.

1 thought on “An all-women Adventure”