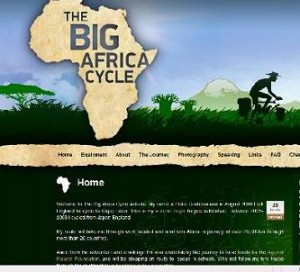 If you’re up for some engrossing bicycle touring travel tales, check out The Big Africa Cycle.

Blog author Peter Gostelow is well-known in the bicycle touring community for his fantastic photography and descriptive writing.  After completing an epic ride from Japan back to his home in the UK, Peter immediately started planning his next bicycle touring adventure:  a bicycle tour through the heart of Africa

Peter gathered a faithful following as a contributor to Crazy Guy on a Bike, but his new Big Africa Cycle website does a much better job at showcasing his talents as a writer and photographer.

Here’s an excerpt from one of Peter’s recent dispatches from Ghana:

I like to think that after years of practice on the road I’m quite good at planning where I’ll sleep come nightfall. The problem in Africa is that night comes quickly.  There you are cycling along in the late-afternoon sun, smiling and greeting the incredulous faces at the roadside, when all of a sudden the sky begins to darken and before you know it, shit, it’s dark. You don’t have enough water or food to pull off the road discreetly and camp, so you continue to the next town on the map and find that the guest-house is way out of town. When you get there it’s now pitched dark and you’re told by a local that a) its $25 a night and b) fully occupied with mineworkers.

I’m referring to my first full day of cycling in Ghana. I had arrived in Nkoroful, which a sign declared to be the birthplace of Ghana’s first President – Kwame Nkromah. The District Police Commander confirmed this. He’d followed me in his SUV for the previous 5km and pulled me over close to the guest-house to ask who I was. Twenty minutes later I was pitching my tent in a former government cabinet office, now occupied by the district police.

Did I not think it dangerous to be riding at night? he asked. Yes I told him. I rarely do it, but darkness comes like a curtain in Africa. It used to be 7pm, but it’s more like 6pm now when the light has gone.

What makes this site special is the writing.  Peter has an eye for detail and a way of weaving his tales together that makes you feel like you’re riding right alongside.

He’s not an adventure maniac out to cycle the 18,000 kilometers through Africa in a record-breaking 120 days.  Peter stops to talk to the locals, learn the history and share it all on his beautifully-crafted website:  The Big Africa Cycle.

Even if you’re not an Africa buff, you’ll want to join Peter on his African adventure.